Be the first to review this product
Korda Guru Fishing Square / Pear / Inline X-Safe Lead - All Sizes Available
As low as £3.67
In stock
SKU
GL13-config

Subtle coating blends into most lake and riverbeds

Rather than simply producing a standard bomb, which have remained largely unchanged since they were invented, Alex Bones decided to look at exactly what the modern angler needed from a lead. The Square leads are the result and they've been tailored to fishing on sloping lakebeds, such as those found around islands and margins. Because the fishing on many commercial waters now centres on these spots, it's vital that the lead can't roll down the slope when it's landed bang on the money. The flat sides of the square lead ensure that it won't. What's more, the dumpy, compact shape makes for the best bolt-rig effect possible, meaning that you'll hook more fish than with conventional leads. Because these leads are a little heavier than many used for match or pleasure fishing they are particularly effective at counteracting the drag effect of a PVA bag as it flies through the air. The Square leads are finished in with a coating that's been formulated to match the lakebed found in most commercial venues. There are three sizes of lead available, on third of an ounce, two thirds of an ounce and one ounce.

Great for holding on slopes

Also useful for use on island margins

Coating has been formulated to blend in on commercial venues

The Pear Leads have a slightly sleeker profile than the Square Leads. They still retaining the ability to hold on marginal or island slopes yet they're much better suited to use on rivers. As with the Square Leads, they fit the Micro Lead Clip perfectly and are finished in with a coating that's been formulated to match the lakebed found in most commercial venues.

Perfect for bomb and pellet fishing

They fly straight, especially when combined with longer, X-Safe stems

Roll-proof inline leads that can be fished with a standard rubber insert, or with the clever Guru X-Safe elasticated system. The inlines are perfect for use with a host of tactics, but take conventional bomb and pellet fishing to the next level. They offer better hooking potential than swivel leads, and especially when teamed up with the X-Safe stems, fly extremely straight and true. There are four leads in the range, 0.75oz, 1.1oz, 1.5oz and 2oz and they are supplied two per pack.

Skip to the end of the images gallery 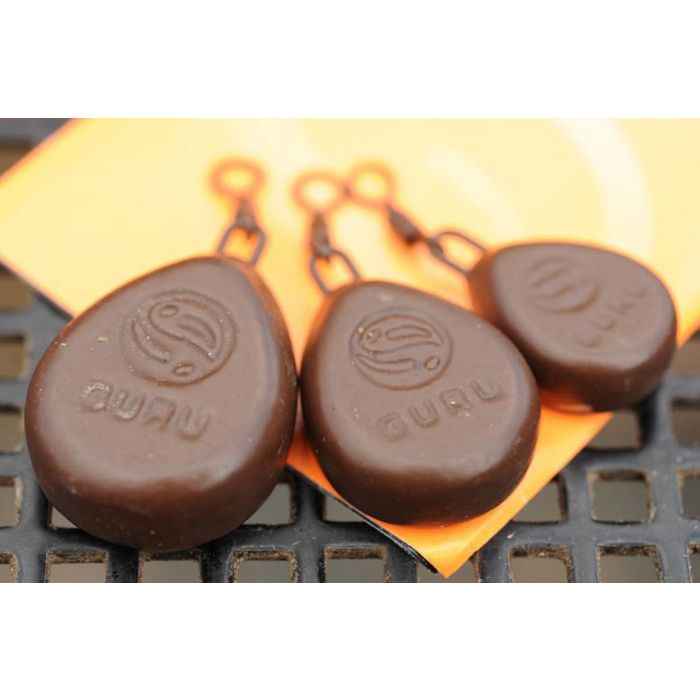 Skip to the beginning of the images gallery
More from Korda

Get the latest updates on the Angling Centre products.

Add me to the Angling Centre mailing list. I can unsubscribe at any time and my details will never be shared with anyone.